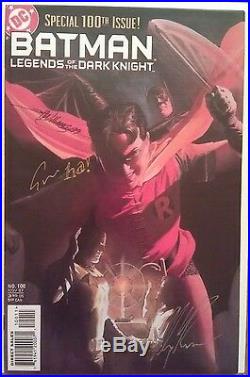 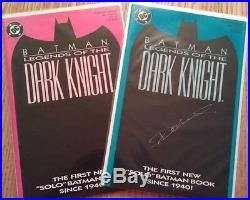 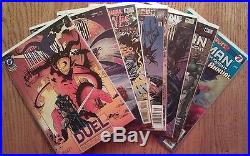 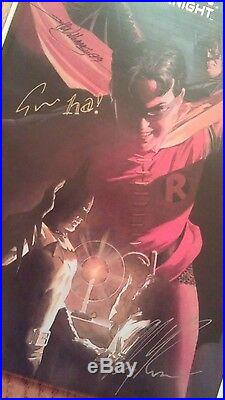 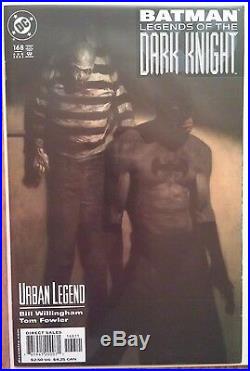 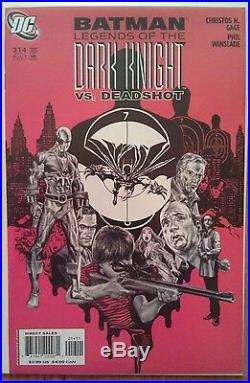 If viewing this item on a portable device and the current promotion does not appear at the top or bottom of this listing, please enable desktop view or similar function on your device in order to view the current promotion. This listing is for DC Comic's complete " Batman : Legends of the Dark Knight " series from 1989. For fans of both the Batman genre and collecting comic artist and writer signatures, this listing covers both passions.

This listing includes the following issues. The complete (mostly unread) issues #1 thru #214 of the Batman: Legends of the Dark Knight series with both the pink and blue covers to issue #1. Issue #0 from the October 1994 Zero Hour story-line. The following issues are signed.

Issues #125 and #126 signed by Greg Rucka. The majority of these mint issues are all unread and were bagged and boarded straight from the receipt from Diamond Distributors and were removed during the signing of the issues. Batman: Legends of the Dark Knight , differs from other Batman titles in that it has constantly rotating creative teams, and the stories are not necessarily part of the current events of the other Batman comics. Initially the title was promoted as running only stand alone self-contained five issue stories of graphic novel quality.

However, after issue 20, stories of different lengths started to appear. While some stories have tied in with the other titles, generally this has not been the case. Most of the stories are set in the early years of Batman's career, though a few have been set in the present and even the future.

Stories set at the beginning of Batman's career are referred to as taking place during Year One, meaning Bruce Wayne's first year (or first several years in some cases) of crime fighting as Batman. The title had been initially promoted as only doing stories from before Robin, but Dick Grayson, the first Robin, did appear in issue 23, though he was still a circus performer. The series, for the most part, eschewed appearances by other DC universe characters save for Batman, Alfred Pennyworth, Commissioner Gordon, and Batman's rogues gallery. Some of the creative talent who have worked on the series include: Chuck Dixon, Alan Grant, Paul Jenkins, Sean Phillips, Archie Goodwin, Dennis O'Neil, Dwayne McDuffie, Alex Ross, Mike W.

This item is in the category "Collectibles\Comics\Copper Age (1984-1991)\Superhero\Batman". The seller is "rhlh99" and is located in Knox, Pennsylvania. This item can be shipped worldwide.