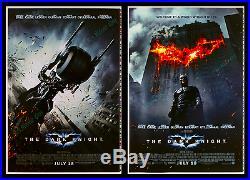 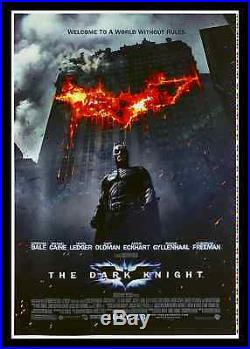 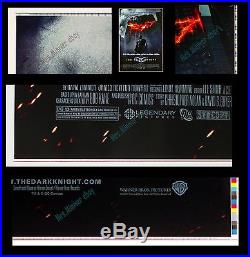 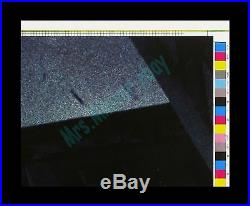 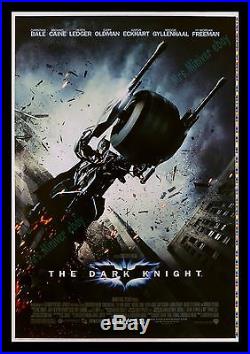 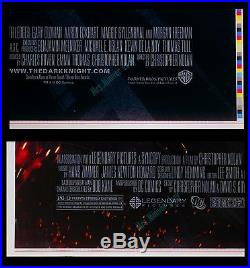 THE #1 RAREST BATMAN POSTERS WORLDWIDE! Up for sale is simply THE greatest and RAREST Original Batman Movie Posters available WORLDWIDE!

You won't find this set of poster proofs anywhere else! That's because I'm the ONLY dealer lucky enough to have them. Now you can be that lucky (or smart) person. I'm a printer's proof aficionado, and upon first sight of the film I started hunting for these. It took me nearly ten years, but I finally tracked them down.

A very savoy print-shop worker saved this set from destruction back in the day. They were perfectly protected in dark storage until I made the owner an offer he couldn't refuse - Don Corleone style. Don't worry, no blood got on the posters (only kidding). Both of these ADVANCE 1-Sheet movie poster Printer's Proofs top the list of rare and important posters known to exist.

If you're a Batman or cinema fan, you'll likely agree, "The Dark Knight" is best film ever released involving a comic book character. In fact, I'd go further by saying, in my opinion, "The Dark Knight" is by far the best Batman product ever created. It's certainly the best film released - from any genre of entertainment - this side of the 21st Century. It was an instant classic when it was first issued into the cinemas back in 2008.

It's one of THE ONLY films enrooted in science fiction or fantasy or horror, and/or the comic character realm to spawn an Academy Award performance. Win, you have to go all the way back to Fredric March's performance in the 1931 film, Dr.

Just for the Oscar win, this film will always be remembered as a standout, as it's one of ONLY two such wins! Nevertheless, we all can agree - "The Dark Knight" ROCKS regardless! If you want something that you can't find anywhere else - that's important - this duo fits that bill. These more than rare 1-of-a-kind posters are UNCUT printer's proofs.

They each measure 28x41 inches. Like I mentioned above, these were protected perfectly, and so they're all in NearMINT ROLLED NEVER-FOLDED ORIGINAL CONDITION! In fact, these were never even rolled, and so NO curl! I have them stored right now between acid-free paper. If youre looking for investment/museum quality posters.

It can crash regardless of any decision you make and can even crash regardless of any decision made by the company related to the stock - Leaving you with a near worthless piece of paper that won't inspire anyone! The magnificence of art and historic documents have an inherent value that relates to civilization and society. This poster/proof set is definitely. Please write with any questions. If you're in the market for top quality original vintage movie posters or Star Wars, then please.

The item "BATMAN THE DARK KNIGHT UNCUT COLOR-BAR PRINTER'S PROOF MOVIE POSTER 1-SHEETS" is in sale since Tuesday, July 17, 2018. This item is in the category "Entertainment Memorabilia\Movie Memorabilia\Posters\Originals-United States\2000-Now".miniver" and is located in Studio City, California. This item can be shipped worldwide.